The Oil and Gas Capital of Canada 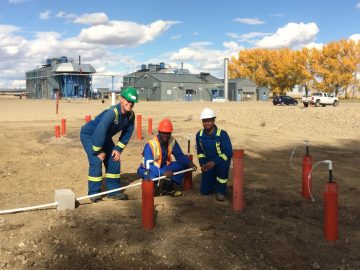 My co-op internship was one of the best experiences of my Environmental Engineering degree. As the economic recession continued for a second year straight and crept its way into 2016, never would I have imagined working in the Oil and Gas Capital of Canada – Calgary, Alberta. In the summer of 2016, I left Vancouver, BC to work for TransCanada Pipelines.

The 2016 summer was a historic and tough year for upstream oil and gas in Alberta. A wildfire began southwest of Fort McMurray – the boomtown centered in the Athabasca oil sands – that swept through the community and forced the largest wildfire evacuation in Alberta’s history. As a visiting British Columbian, I have experienced some of the Albertan lifestyles, including but not limited to: Stampede festivities, visiting the oil sands in Fort McMurray, hiking the Canadian Rockies, and witnessing the glacier lakes.

Downtown Calgary is a completely different atmosphere from downtown Vancouver. During most of the week downtown Calgary is only heavily occupied when businesses are open – and of course, during the weekends. In addition, Calgary’s housing and job market are in for another tough year in 2017 as the region’s economy slowly rebounds from its worst recession in decades.

The views of hiking in Banff National Park.

TransCanada operates complementary energy infrastructure businesses: natural gas pipelines, oil pipelines, natural gas storage, liquids storage and power generation facilities. In addition, TransCanada transports more than 25 percent of North America’s daily natural gas demand and is our continent’s largest natural gas storage provider. During my internship, I gained insight from my mentor about the benefits of pipelines that not only power Canada’s economy, but offer a safe and environmentally friendly option to transport large volumes of energy from remote producing regions to our country’s most populated areas. As an environmental engineering intern, I was involved in a variety of tasks, some of which include: a groundwater remediation project, compliance, spill and gas release reporting, determining risks, and reviewing the company environmental program. I also served on the TransCanada Joint, Health and Safety Committee and the TransCanada Student Work Experience Enhancer Committee. I felt my coop internship was a good avenue to compliment my educational learning in the classroom with real world experience. My work experience has provided me with an appreciation for the importance of oil and gas, not only as a source of energy, but as a key driver for all sectors of the economy.