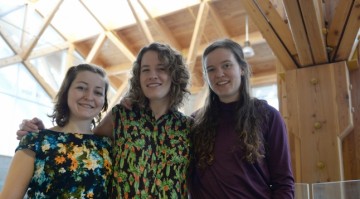 The Nak’azdli Whu’ten First Nation and the District of Fort St. James have a better understanding of their wastewater treatment options thanks to the work of three UNBC Environmental Engineering students.

Allison Matfin, Kathleen Horita and Maureen Long spent four months using the knowledge they’ve gained in the classroom and information gathered through consultations with community members to produce a report on the feasibility of new water treatment options for the communities.

“It’s a different way of doing design – going out and getting the community feedback and incorporating it into the design work,” Horita said.

The final report recommends a sequencing batch reactor, which uses microorganisms to treat the water through five stages. The students also considered upgraded and relocated lagoons, a membrane bioreactor and a moving bed biofilm reactor.

In making their recommendation, the students considered the capital and operational costs of the plant, its footprint and environmental considerations, the simplicity of operation, the opportunities for community learning, odour, the use of the resultant solids, the ability to reuse water, potential energy recovery and the level of innovation of each system.

Matfin said the feedback the group received was an important part of the final project.

“We were able to work with the communities and hear what they cared about and then we incorporated those thoughts and concerns into our design work,” she said.
The communities can now take the students’ findings and decide how to proceed.

“The first was in our effort to collaborate on a project and make use of UNBC expertise and research ability,” she said. “The second was that having this early phase research done by UNBC students provided us with a cost-effective jump start to this project.”